" We not only tend to overlook or forget negative evidence that contradicts our beliefs,
but when others point such evidence out to us, instead of thanking them for this chance
to correct our beliefs, we tend to get angry with them, and this anger increases
in direct proportion to our commitment to the beliefs."

Eric G. Turner opens his book "The Typology of the Early Codex" with the statement that "The greatest benefactors of mankind are unsung and unknown - the inventor of the wheel, the deviser of the alphabet. Among their number we should place the inventor of the codex." The opening paragraph then continues to elaborate on the advantages of the codex and the disadvantages of the roll. There is nothing here to contradict. Three cheers for the "unsung and unknown"!!!

However, in the second paragraph, the author states ...

"Let me be quite clear. I do not mean to reopen the question of the origin of the codex. C.H. Roberts in his British Academy paper on "The Codex" of 1954 has set out a series of attractive hypotheses which are likely to hold the field until new evidence is forthcoming.. Pointing to the fact that almost all Christian texts found in Egypt (beginning in the second century of the Christian era) are in codex, not roll form, at a time when parallel finds from the same source show that the codex form was scarcely used at all for Greek and Latin literature, he has suggested that the codex was a deliberate innovation of Christian evangelists, who evolved it from the parchment notebook."

The following article will present a variety of evidence, and arguments drawn therefrom, by which the above hypothesis of C.H. Roberts, namely that "the codex was a deliberate innovation of Christian evangelists"" [of the 2nd century], an hypothesis which appears to beg a theological agenda, may no longer be required.

The Rylands papyrus: Asserted to be the earliest surviving new testament fragment of a papyrus codex containing John 18:31-33, and 37. It has been dated from 130 CE.

See the separate article on New Testament Apocryphal Corpus and the Greek Papryi.

The dating process used to assess the estimated date of all the above manuscripts and fragments is called paleography, and resembles handwriting analysis. The example provided to the left is called P.Oxy.104

While it may be reliable, paleographic assessment is only an estimate. It is usually considered along with a host of other dating techniques, and is rarely used without any other corroboration, as it is with the pre-4th century "Early Christian Papyri" fragmnents, in isolation and an authority. For example, if a manuscript were to be written in 325 CE, but in the more ancient Hadrian script, the paleographic assessment would tend to place the MS in the time of Hadrian. Paleographic assessment cannot be relied upon as a primary method of dating, unlike C14 analysis, or a dated fragment, for example.

We need an outline of the reasons by which the handwriting script out of which these 110 greek letters is fashioned could not have been used in the fourth century.

Additionally, looking at the image you will see a number of the papyri edges that are "floating free" and which contain no writing at all. What's the problem with sending these to the C14 lab?

The population demographics for the city of Oxyrhnchus take a huge explosion of high orders of magnitude in the mid-fourth century. One might therefore expect the rubbish dumps to have followed suit. One might be so bold as to congratulate anyone who found the small and completely overshadowed deep layer of rubbish from the 2nd and 3rd centuries underneath the veritable mountain of rubbish left behind after the population explosion peaked in the mid-4th century.

The city is described then as dual -- one city inside the walls became so overcrowed that another then formed outside the walls. The claim that anyone has walked into Oxyrhynchus and managed to find 2nd and/or 3rd century "christian papyri fragments" is not supported by the demographic evidence. Grenfell and Hunt employ local Egyptians at a few pence per day to gather up the fragments from over seventeen ancient rubbish dumps around Oxyrhynchus. 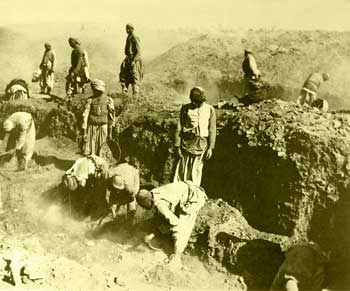 The fragments are then securely packed in biscuit tins and placed into a series of over 900 brief cases sized boxes and sent back to Oxford in the early twentieth century. Perhaps detailed academic analysis has made its way through at least 128 boxes to date.

The conjecture that the papyri fragments from the Oxy tips predate the extreme explosion of its population demographics is not logical. Neither does it seem to be supported by the carbon dating process. .

There are located on the web a number of copies of THE COINS FROM OXYRHYNCHUS By J.G. MILNE. Example site (1): The Open Library; example site (2): Coins from Egpt. The data from this article has been collated to present the following analysis of the numbers of coins found at the Oxyrhynchus tip network according by the decade of their mintage. The result supports the above assertion, that prior to the fourth century, the city which became Oxyrhynchus was quite small.

Our response to this mass of paleographic dating before the time of Constantine is to urge a carbon dating process to be undertaken on any of these purported NT fragments or manuscripts. This will either lend support to the existing paleopgraphic dating, or it will not. Unfortunately these fragments are not amenable to C14 analysis due to their contamination with the environment, and manual handling in the modern epoch by the archaeological teams.

To my knowledge (2013) there has been no results published in respect of any carbon dating test of a manuscript or fragment of the new testament canon.

The one extant C14 citation in the field is in respect of Codex Tchacos containing non canonical texts:

This result may be depicted diagramatically as follows. However in this instance it should be noted that in this case, most of the members of the investigative teams prefer a date in the fourth century. (2) the Nag Hammadi Codices containing Gospel of Thomas are dated via cartonage (and other means) to the mid 4th century.

This provides an opportunity of making a prediction, namely that the carbon dating (or dating via any new technology) of any NT manuscript or fragment will yield a date no earlier than Constantine (c.325 CE). Further, it is envisaged that technological advances may yield a new method of dating such archaeological fragments, perhaps for example, a method to detect the age of the oldest water molecules in the specimen, without having to destroy the specimen. Such technology may arise from multi-spectral imaging.

Practically all of the new testament related fragments appear to be sourced not from scrolls but from pages which were bound in codices - a sewn and folded book not a roll. If these fragments were to be dated even to the first half of the second century, then these fragments would be amongst the earlier surviving examples of a literary codex. Around 90 CE, Martial circulated his poems in codex form, presenting this as a novelty. Some people have even suggested that the "early christians" were very smart people and invented (or at least exploited the invention of) the codex. This is thus a highly tenditious argument.

We are left with two alternatives: either

a) the early Christians were the first to exclusively and universally use the codex in preference to the roll, or

b) the (palaeographic) dating for the early Christian manuscripts is wrong, and that they are really all from the 4th century.

The following data is sourced from A draft Adaptation of THE BIRTH OF THE CODEX
by COLIN H. ROBERTS and T.C. SKEAT, [1987] prepared by R.Kraft 2008.

If scholars are using other fragments of writings from the early centuries to serve as benchmarks for the dating of the handwriting, is not the assumption that the collection of scribes' handwriting were somehow all representative of their century and station in the milieu. The comparanda include all sorts of common documents, prepared by common people who were scribes of the common and everyday empire. In contrast, the "christian" people who were supposedly copying the new testament texts were some form of secret society, underground and out of sight - to all intents and purposes some form of insular and separated group. We might assume they did not "subcontract" their NT copying to the common scribes of the empire. This suggests that the principles of comparanda (used to date the fragments by comparing scribal handwriting) might be stretched to the limit. The New Testament scribes were not the common everyday scribes in the empire.

Most New Testament papyri with a known provenance were found at the site of the ancient
Egyptian city of Oxyrhynchus, or more precisely: on that city’s rubbish mounds. The fact
that sacred scriptures were discarded as garbage is surprising in view of the holiness
of Christian biblical manuscripts, intrinsically and physically. Yet the trash aspect of
provenance has never been adequately problematized or studied. Taking a social-historical
and garbological approach, this article demonstrates that at Oxyrhynchus in antiquity
entire manuscripts with biblical writings were deliberately discarded by Christians
themselves, unrelated to persecution and issues of canonicity.

Since the middle of the twentieth century, there has been a tendency among scholars
to marginalize the palaeographical opinions of Grenfell and Hunt. Their alleged belief
that the codex format was a post-third century development is said to have induced them
to date fragments of Christian codices much later than they would have on strictly palaeographical
grounds. I argue that this is a serious misrepresentation of their views and practices.

The date of the earliest New Testament papyri is nearly always
based on palaeographical criteria. A consensus among papyrologists,
palaeographers and New Testament scholars is presented in the edition
of Nestle-Aland, 1994. In the last twenty years several New Testament
scholars (Thiede, Comfort-Barrett, 1999, 2001 and Jaroš, 2006) have
argued for an earlier date of most of these texts. The present article
analyzes the date of the earliest New Testament papyri on the basis of
comparative palaeography and a clear distinction between different
types of literary scripts. There are no first-century New Testament
papyri and only very few papyri can be attributed to the (second half
of the) second century. It is only in the third and fourth centuries
that New Testament manuscripts become more common, but here too the
dates proposed by Comfort-Barrett, 1999, 2001, and Jaroš, 2006 are
often too early.

The authors present a table showing ranges of dating (earliest-latest) in
which only the following papyri are dated (at latest) before 300 CE:

The Limits of Palaeographic Dating of Literary Papyri: Some Observations on the Date and Provenance of P.Bodmer II (P66)
By Brent Nongbri, Macquarie University [2014]

Palaeographic estimates of the date of P.Bodmer II, the well-preserved Greek papyrus codex of the Gospel of John, have ranged from the early second century to the first half of the third century. There are, however, equally con- vincing palaeographic parallels among papyri securely dated to as late as the fourth century. This article surveys the palaeographic evidence and argues that the range of possible dates assigned to P.Bodmer II on the basis of palaeography needs to be broadened to include the fourth century. Furthermore, a serious con- sideration of a date at the later end of that broadened spectrum of palaeographic possibilities helps to explain both the place of P.Bodmer lI in relation to other Bodmer papyri and several aspects of the codicology of P.Bodmer II.